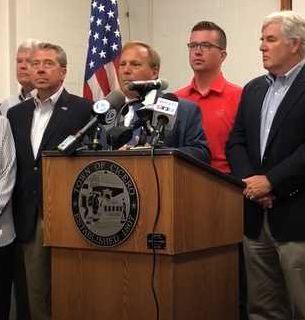 The Town of Cicero was host to a joint meeting of area town supervisors and mayors to voice their concerns. The following is the public release of that meeting:

As public debates the latest DEIS, these community leaders are staunchly against the community grid-only proposal

CICERO — A diverse coalition of community leaders teamed up today to call on the state Department of Transportation to ensure that any decision regarding I-81 takes into account the well-being of every single community in Onondaga County. The future of I-81 will have wide-reaching impacts, and the final decision must benefit the majority of communities. Fairness should be the goal, not political theater.

The comments were made at a press conference held on July 16, 2019, at the Cicero Town Hall.

With five meetings already held by the state Department of Transportation and four more scheduled, including two this week, the community leaders joined together to voice their concerns and make sure all viewpoints were being heard during this phase of the decision-making process.

“It’s not a done deal,” said Mark Venesky, Supervisor of the Town of Cicero.

“Everyone’s voice needs to be heard, remember, this is our community,” said Damian Ulatowski, Supervisor of the Town of Clay.

“Salina is the modern crossroads of New York State, LaFayette is the historic crossroads, and this plan abandons both of these great communities. This is just more of Albany leaving Upstate New York behind,” Danny Fitzpatrick, LaFayette Town Supervisor, noted.

While public opinion has overwhelmingly shown that Central New Yorkers do not support a grid-only proposal, the preservation of high-speed access remains the regional consensus. In addition to dozens of local towns and villages passing resolutions in favor of I-81, all 19 town supervisors in Onondaga County have joined in voicing their support for maintaining high-speed access through the city and region.

Today, the group shared their concerns about the negative environmental and economic impact in the region if high-speed access is removed. The community grid will work for only a select few, leaving thousands stuck in gridlock on congested city streets, and delivering devastating blows to local businesses that depend upon highway traffic to deliver them customers. Town of Manlius Supervisor, Ed Theobald added, “Removing the existing highway altogether, diverting traffic to the east on I-481 leading to severe congestion, and relying on city streets to convey large volumes of local, regional and long-distance traffic would inevitably harm residents in the city and surrounding communities alike.”

The video of that meeting may be viewed by clicking here. Should you have concerns on the future of I-81 that you wish to share, you’re welcome to contact my office. Thank you